Rhubarb reminiscences and other stuff about Rheums 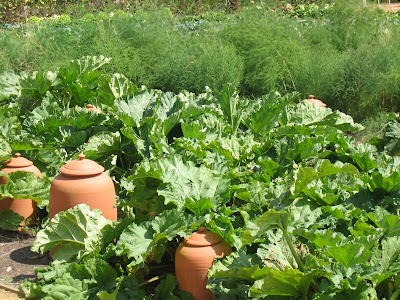 We have always had a patch of rhubarb in the garden and I remember, as a small child, being marched down the garden by granddad, who was a keen vegetable gardener, to the rhubarb patch. I used to suffer from terrible all-over heat rashes and he was convinced that a stick of this plant would cure me… “sort your blood out our Mel” he would chunter. Chinese medicine does use rhubarb to purge the system and to encourage the liver to detox, so maybe there was some truth in his traditional country remedy. It became a real treat to go down the garden, break off a stem and dip each mouth-full in the handful of sugar I had been given to sweeten it. At the time I thought It was the best medicine I’d ever had, not sure it cured the rash but I definitely felt better from the experience and attention! 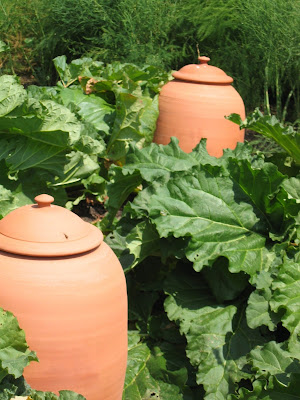 For a novice vegetable grower, there isn't really an easier plant to start with than rhubarb. It is a very easy crop to grow and needs little attention. It is very hardy, (mine was popping up in the snow last week), and all it needs is fertile soil, some sunshine, a bit of space and hey presto! you will be reaping the rewards when little else is ready for harvest. 'Victoria' is a great variety to grow! Once planted divide every three years and then leave picking for one.

At present I only have a small garden and I grow Rhubarb in a pot. I know this is not ideal, however, I keep it well fed and watered and it has rewarded me with enough sticks for a pie each year!
A rhubarb forcer, a decorative terracotta pot or an old chimney pot placed over the crown, will encourage the rhubarb to grow taller, sweeter and more flavoursome stems. 'Timperley Early’ is the variety most commonly forced. In terms of aesthetics and design, forcers are also a lovely feature in a garden, giving form and contrast to the blousey  leaves.
Left to its own devices I think the plant, with its large green leaves, stunning red stems and large flowering stems covered in masses of creamy flowers, is an attractive addition to any garden.
Find out about the different varieties of edible Rhubarb here.

If you are a fan of its form and you are not bothered about eating it, (ornamental garden varieties are poisonous), you might like to grow one of the domesticated cousins from the rheum family. They exotic looking plants have fantastic architectural foliage and are ideal ‘statement’ additions to a bog garden or moisture retentive areas of the garden, as they thrive in wet conditions. If you do not have this type of soil you can create the right environment using a plastic liner buried beneath the plant's roots. A word of warning though give them plenty of space as they will soon take over!

This bold architectural plant is ideal as a ‘feature’ plant, having attractive form and foliage. It has large, palmately lobed leaves that open in rich purple, fading to dark green with purplish undersides. The flowers stand high in large erect panicles and are covered in masses of small crimson flowers.

This huge exotic looking variety will take over so give it lots of space. It has large toothed palmate leaves with green tops and very intense purple reverse, producing new, freshly coloured leaves throughout the summer. The flowers are tall spires of tiny creamy coloured flowers that bloom in early summer.

A red variety similar to the above having colossal, divided leaves. The leaves begin reddish bronze maturing to become dark green with purple undersides, turning red in the autumn. Maroon flowering panicles appear in the summer.

Another ornamental Rhubarb, which is also a striking architectural perennial, is grown mainly for its heart-shaped leaves with red-purple leaf undersides. The tall flower spires made up of masses of tiny flowers are also attractive.

All that talk of Rhubarb has made me yearn for a scrummy Rhubarb crumble served with lashings of custard! Must pop out and buy some of this fantastically versatile vegetable, hopefully it will  be in the shops soon!


Posted by The Good Garden Collective at 02:54