Feeding the imagination - a Bloomsbury garden flourishes in East Sussex


What is it about the Bloomsbury Group that so captivates teenage girls? It can’t just be their infidelities – teenage girls are quite relaxed about affairs, if undying love elsewhere is the ultimate goal. It must be something larger; the whole, messy melange that Bloomsbury represents – the personalities, the atmosphere, the houses, the creativity, the progeny, the privilege and, at least for my teenage self, the indisputable force of the female protagonists.

I was fascinated by Virginia Woolf, with her lugubrious face and confused sexuality. I loved her writing – not just her novels, but her essays and letters too. I loved Vita Sackville-West, and her determination to make Sissinghurst a beautiful and welcoming home, in order to compensate for having lost her family pile through male succession. Katherine Mansfield was the most tragic of all – elfin, racked with TB, stricken with poverty, mistreated by her beloved, producing so few, but such exquisite stories.

But I saved my greatest affection for Vanessa Bell. As the sister of Virginia Woolf, I felt she had a lot to compete with (I say this as the sister of an brilliant, competitive girl), and yet she seemed to make a world entirely for herself, in which her sister and her circle were welcome, but not the centre.

The oldest of four siblings, Vanessa was beautiful and unconventional. She married the art critic Clive Bell in 1907, and they had two sons, Julian and Quentin. The marriage did not last, and in 1916 she moved to Charleston Farmhouse (near Firle, in East Sussex) with her two children, a nurse, a housemaid, a cook and her new partner, the famously promiscuous homosexual artist, Duncan Grant. Duncan bought his current lover, David ‘Bunny’ Garnett – who eventually, and scandalously, married Angelica (the daughter that Duncan and Vanessa later produced).

Vanessa and Duncan immediately chose rooms for their studios, and set about decorating the house. Walls, fireplaces, door panels and furniture were all ornamented to harmonise with their paintings, and Omega fabrics and ceramics were displayed throughout the house.

Charleston’s walled garden was created by Vanessa and Duncan, to designs by her former lover, the artist and writer Roger Fry. They transformed vegetable plots and hen-runs into a lovely area, blending mediterranean influences with cottage garden planting.


In the 1920s, a grid of gravel paths was added to give structure to beds of plants chosen for their intense colour and silver foliage. These became the subject of many still lives over their long residence at Charleston. The writer Dora Carrington wrote of the garden, "Never, never have I seen quite such a wonderful place! ... What excellent things there will be to paint in that garden with the pond and buildings."

The garden also contains sculpture - classical forms share space with life-size works by Quentin Bell, mosaic pavements and tile edged pools. The orchard offers sustenance and shade and the pond provides a focus for tranquil contemplation. As well, a summer garden for playing and painting became an enchanted retreat from London life. As Vanessa Bell wrote in 1936, “The house seems full of young people in very high spirits, laughing a great deal at their own jokes… lying about in the garden which is simply a dithering blaze of flowers and butterflies and apples.”

Charleston was kept as a summer house for Vanessa’s remaining years, and became the centre of the holidays for the Bloomsbury Group. She and Duncan Grant continued to live together until her death in 1961. Grant died in 1978.


I grew up in Sydney, twelve thousand miles away from Gordon Square, Charleston and Sissinghurst Castle. And yet I believed then that I could find my way blind-fold around Bloomsbury, or from garden room to garden room at Sissinghurst. I knew the layout of Charleston, and was certain that I would be more at home with Vanessa, Duncan and Angelica than with my own, troubled family, Of course, they were gone by then, or were old and entirely unreachable. In any case, they could hardly be expected to understand an antipodean girl for whom seasons themselves had little meaning, and who’s dreaming of their endless, English summers had little basis in complicated reality. Their lives and homes and gardens existed entirely in my imagination – a refuge and an extravagance – until I came to live in England in my mid-twenties.

I became a gardener – I mean a career gardener – after my children were born. I know that those early years - poring over pictures of Charleston Farmhouse and Sissinghurst Castle, envying their owners ability (and means) to live a life proscribed by art, dedicated to beauty, entirely subsumed by self – were formative. I learned then that a life can be built outwards from a place, that if you get the structure right, the rest will follow.

My daughter is now at Sussex University, studying English (Virginia Woolf, Katherine Mansfield…) and I intend to visit Charleston again next time I visit her. I wonder if I can convey to her what a refuge this place was to me once, what a comfort and an inspiration, or explain that it is possible to imaginatively inhabit somewhere you have never been? 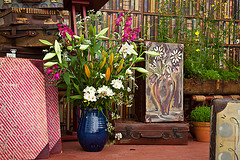 Charleston Farmhouse is now managed by The Charleston Trust – a charity set up in 1980 to restore and maintain the property and it’s collection for the benefit of the public. It is open 27th March – 27 October.

Charleston holds an annual literary festival, and this year the dates are 17-26th May. For details of tickets click here

The house is situated near the village of Firle, in the Lewes district of East Sussex. Click here  to find out more.