Not just for summer 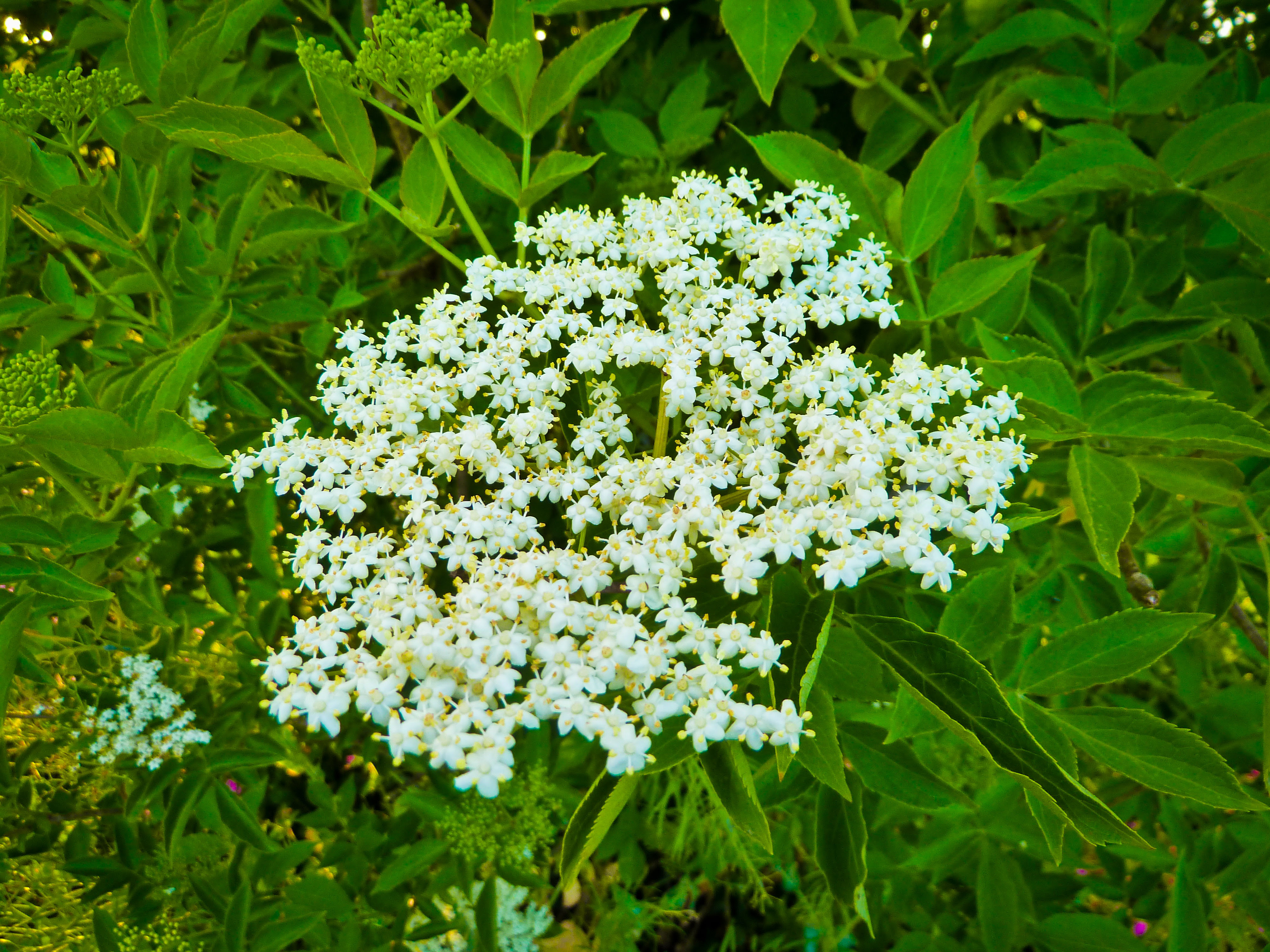 As well as being interested in vegetable and fruit growing I have become increasingly concerned with preserving and transforming these natural treats into goodies that can be enjoyed throughout the whole year.  Loving Elderflower cordial I made a promise with myself to pick and make some this year.  I had been waiting since May to find a plentiful and not by the road side bounty of Elderflower.  These two tips are important, fumes from the road can damage and toxify the delicate floral notes of this flower and also it is wise to pick from trees that are bountiful in flowers so that your foraging will not compromise its future growth.
Having satisfied these criteria I spent a good hour shaking and picking of all the bugs.  Some may find this tedious – this is where I know I have weird OCD type behaviour because I just love the preparation of food: music, my own thoughts, knowing that this care and effort is going to lead to something delicious that can be shared with friends and family - couldn’t be better.  There are various recipes that can be found, most say that you require citric acid so off I went to various Chemists, without any luck – and quite frankly probably being logged as a drug addict.  Citric Acid apparently is used for the mixing and consumption of illegal drugs.  However did my research and found this recipe which uses lemons,  it worked brilliantly: 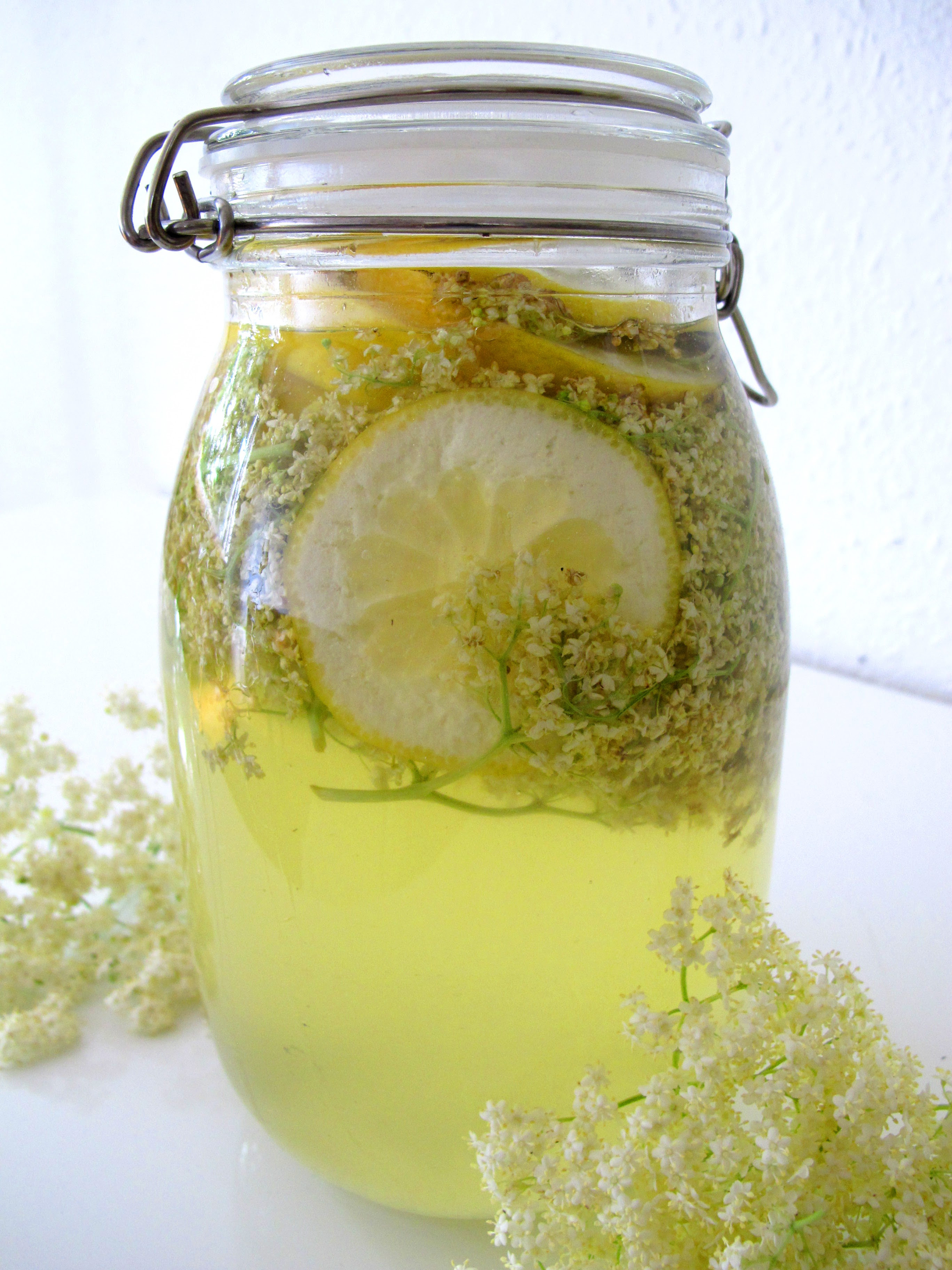 Pick off any insects and beasties you see on the flowers.

Heat the sugar and water in a large saucepan until the sugar has dissolved. Strip large ribbons of zest off the lemons with a vegetable peeler, lose the knobbly ends, then slice the lemon and place in a large bowl with the elderflower heads.

Pour the hot syrup over the lemons and elderflower heads and give it a good stir. Cover the bowl with a cloth or a big plate and leave it for 24 – 48 hours. (the longer you leave the more floral notes will be achieved)

Strain the mixture with muslin or kitchen paper in a sieve and pour into sterilized bottles. I used a couple of small glass ones for the fridge which should be used within a month and a small plastic bottles for the freezer for future use.

Apart from using it as a drink with soda water for day and the addition of a shot of gin at night, I'm looking forward to using this long after the summer has gone.
Posted by The Good Garden Collective at 05:41 No comments:

Mushroom foraging in Quinton, Birmingham and still here to tell the tale! 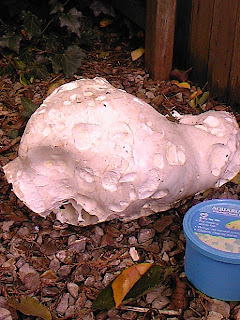 I have always wanted to eat wild mushrooms and other than occasional breakfast treats of wild field mushrooms that grew in the meadow alongside our family home, I am bamboozled by the information and the  minutiae of detail that helps you differentiate the edible species, which would help me to forage for other types. So when, for the third year running, a ‘giant puffball’ mushroom (Calvatia gigantean) appeared in my garden I was determined to pluck up ‘Bear Grylls’ type courage and sample its lovely white flesh. I was also pleased to have discovered it before the insects had made a meal of it and prior to it reaching maturity when it turns brown and dispersed its spores (up to nine trillion spores, according to one expert).

But first, I had to be sure that I had identified it correctly…
·        It is easily identifiable due to its distinct appearance, a large white mass without a stem ü
·         Aptly named these mushrooms grow between 10cm and 60cm in diameter ü my specimen was about 5cm a lot smaller than the first one that appeared which was at least 30cm!
·        Puff balls lack gills or any other exterior spore-producing features ü
·        It is found growing on domestic lawns ü
·        The final identification test is to cut it open, it should reveal a dense white flesh with no spores ü

Yippee I had found myself an edible puffball!

I prepared the mushroom by removing the outside skin and cutting it into slices. I simply sautéed it in a little oil a sprinkle of freshly grown parsley a twist of salt and black pepper and a splash of Worcestershire sauce. Served up on a slice of toast made by our local baker Albert (from the Bearwood Pantry) the fungi stayed firm and plump.
There was one more thing to do before I ate this culinary delight… a text message to my husband asking him to call me in one hour exactly just to check I was still alive!

The mushroom did not disappoint and was a scrummy lunch time treat especially so because it was foraged from my own small city garden! 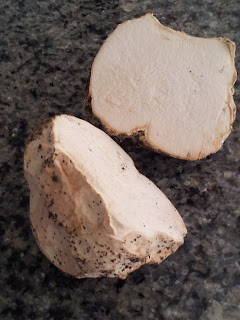 Although I survived this experience please ensure you thoroughly research any mushroom before you consider eating it.

Follow this link and scroll down to find out about the false giant puffball, a.k.a. the ‘poison goalpost fungus’
very funny!

Posted by The Good Garden Collective at 05:14 2 comments: